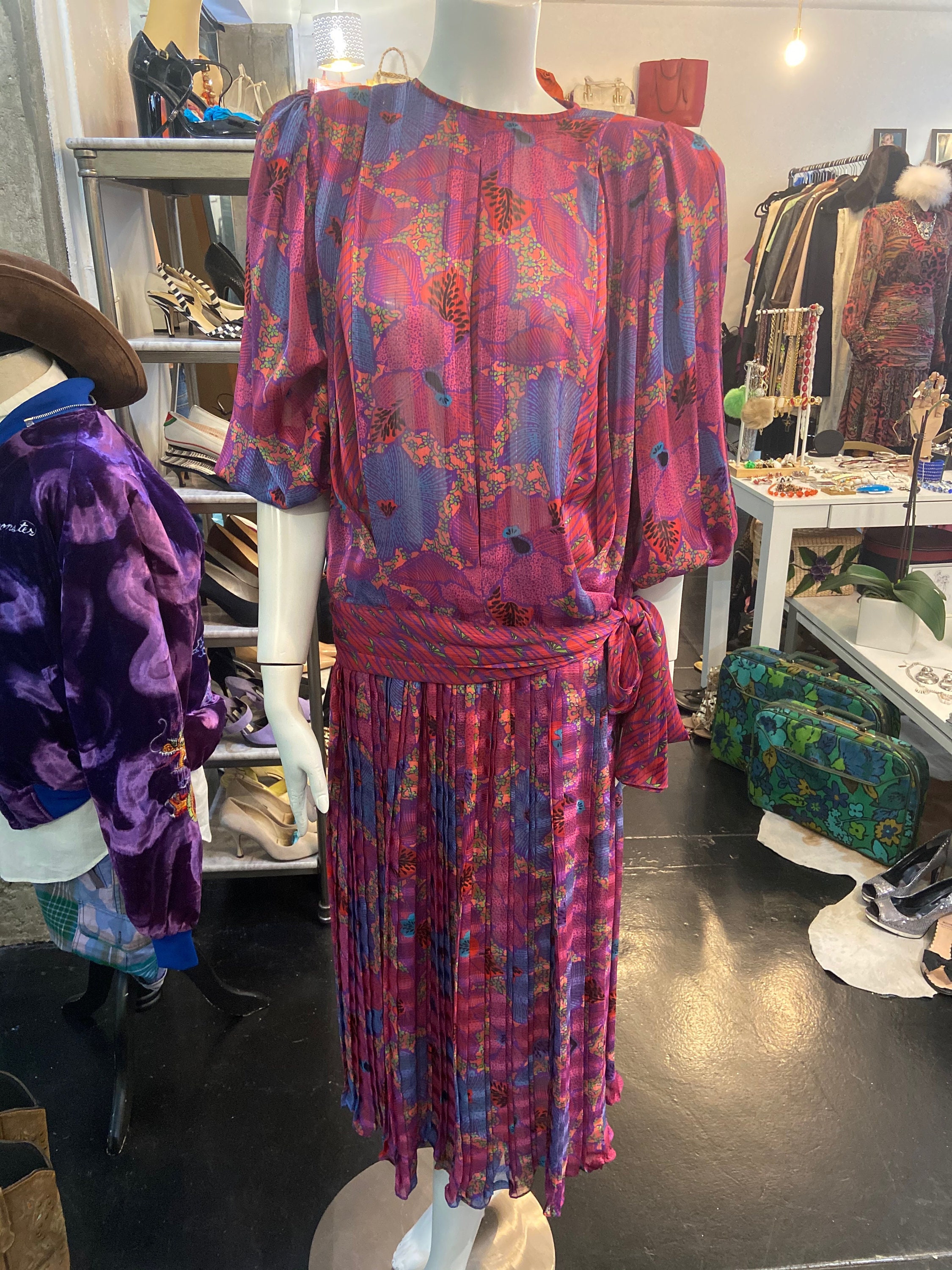 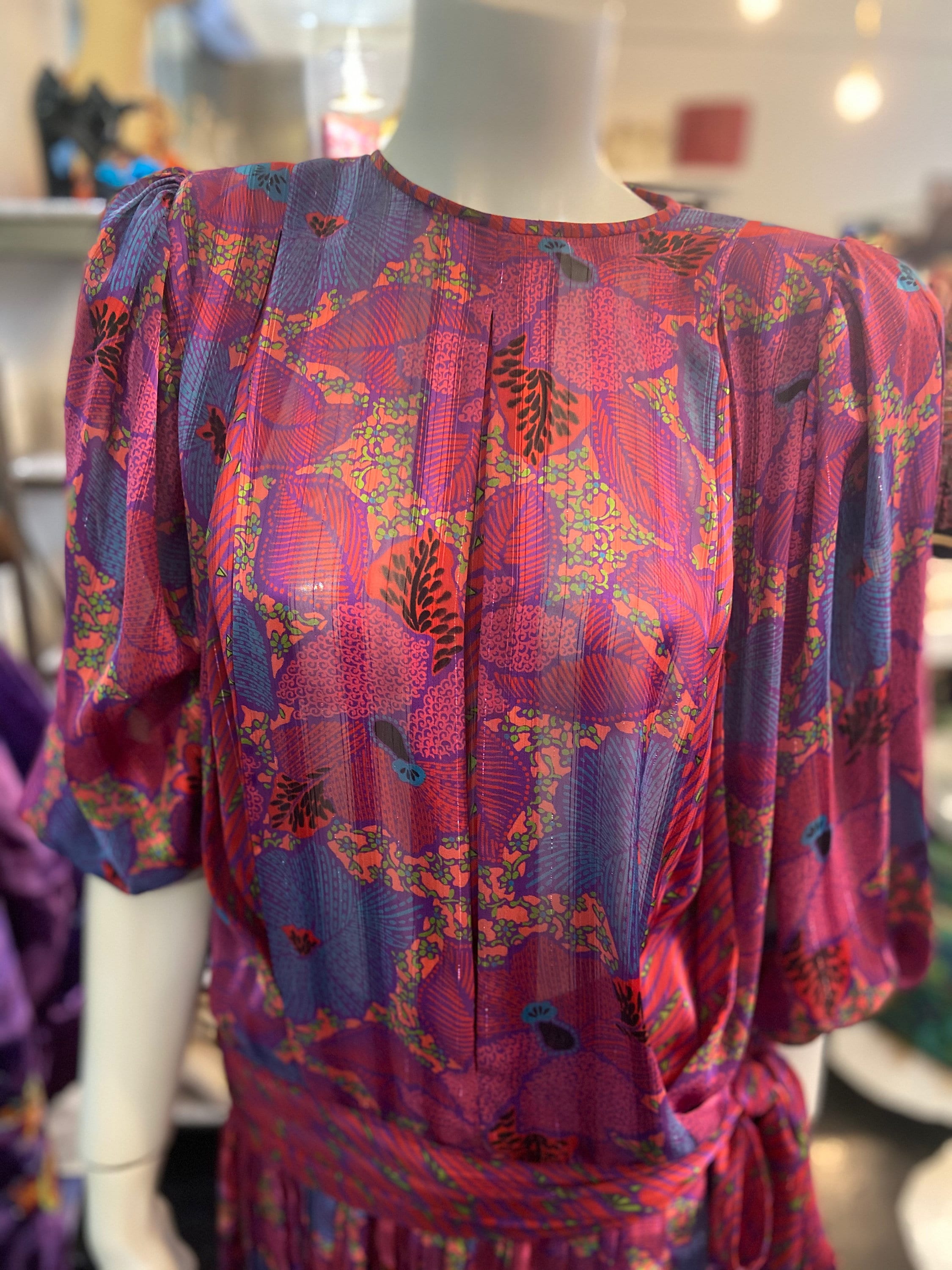 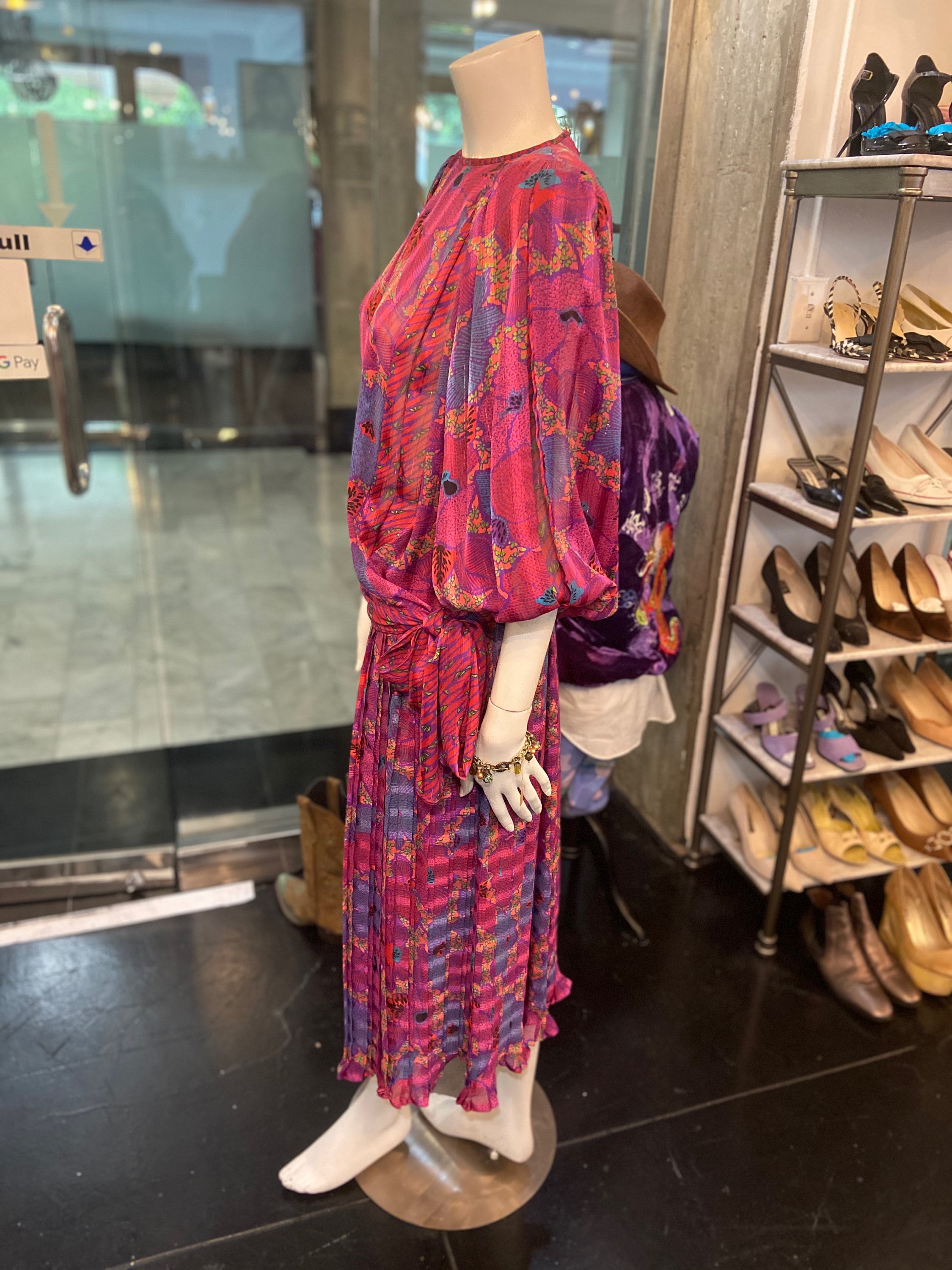 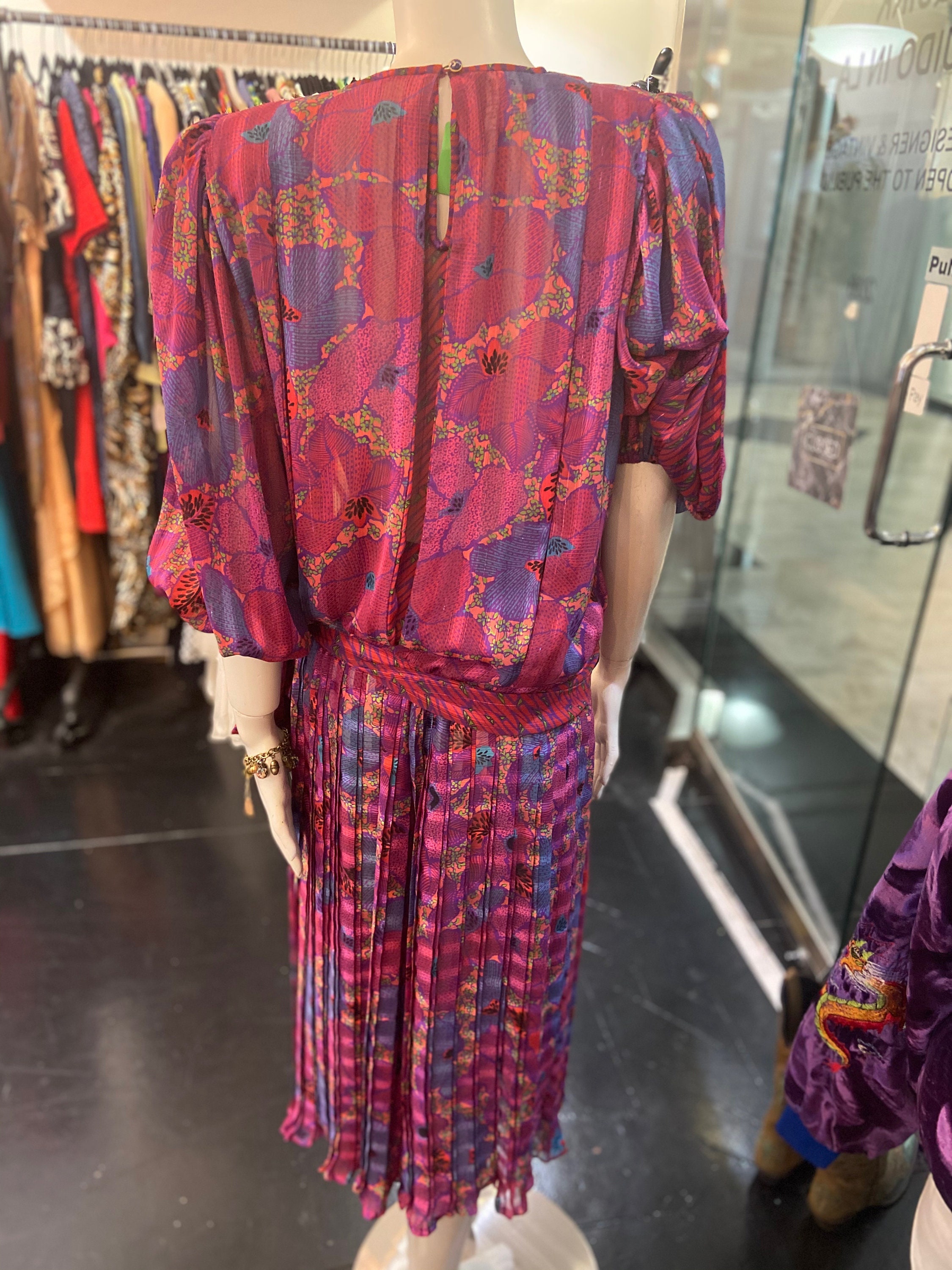 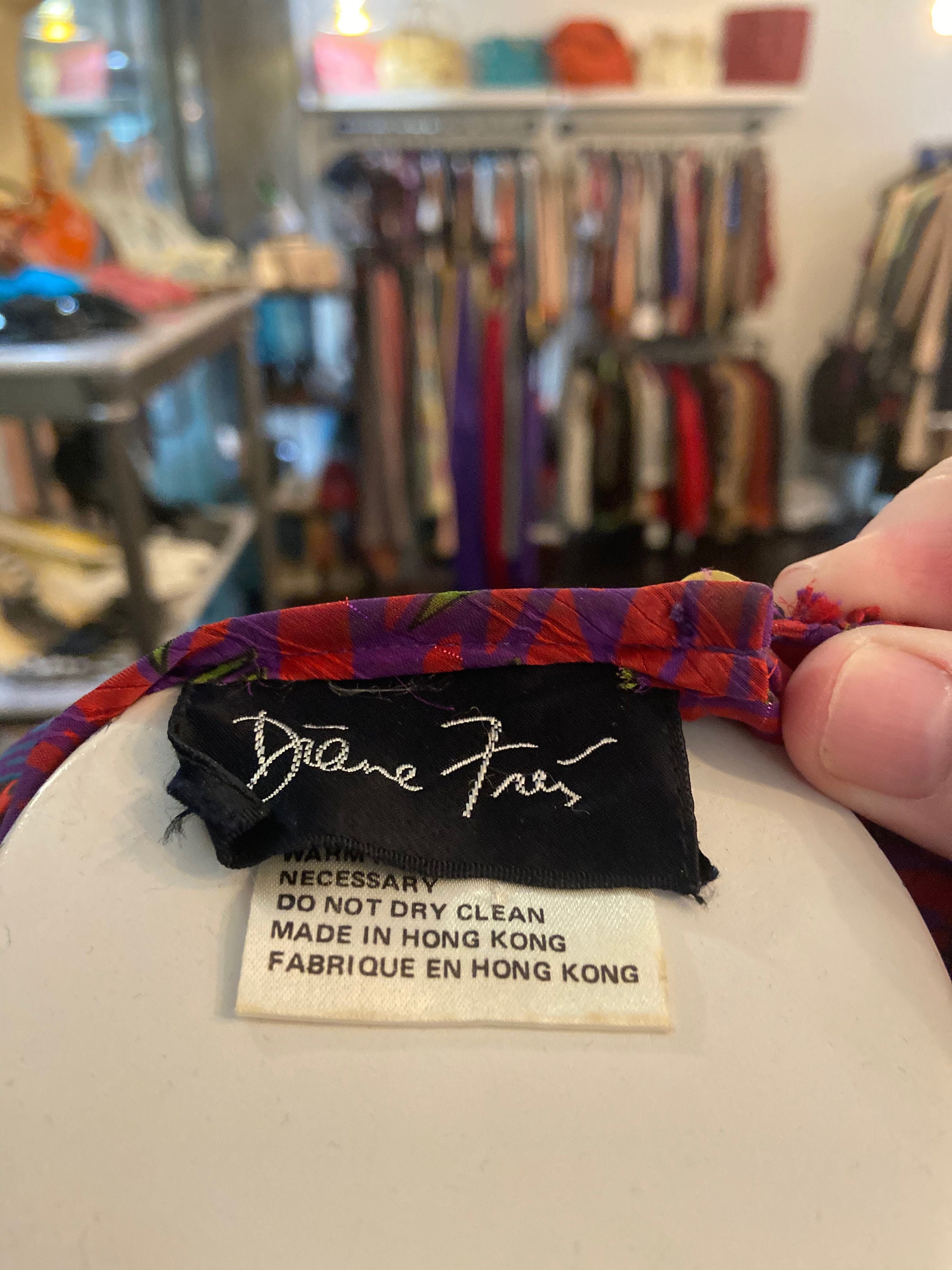 
This gorgeous two-piece set is in very good/excellent vintage condition.

Diane Freis is one of the few Hong Kong-based designers to have gained an international reputation. Hers is a typical Hong Kong success story, based on hard work and determination. Since arriving in the territory in 1973, she built a commercially successful brand name that became a role model for Hong Kong manufacturing.

The Freis signature is represented by multicolored prints applied to one-size, easy-care dresses, primarily designed in polyester georgette. Noncrushable and easy-to-pack, they have presented a travel solution for higher income, more mature women in search of a glamorous and feminine look. The fashion philosophy is pragmatic: Freis stresses the importance "of making a one-size dress that allows the freedom of fit in our daily schedules of health programmes one day and over-indulgence the next." With their hallmark elasticated waists and shirring, the dresses covered imperfections but would never be called dowdy. The prints were usually exotic, the designs included pretty florals, dramatic geometrics, bold stripes, and plaids, with embroidery and beading as particular features of the look. Besides her traditional georgette, Freis has used silk, cotton, and wool coordinates, hand-knits for casual daywear, and chiffon and taffeta for grand evening ensembles.

Freis' eye for color and design can be attributed to her fine arts education at the University of California in her native Los Angeles. While a student, her sideline was to create elaborately beaded jackets, which she sold to celebrities such as Diana Ross. It was a search for new, exotic materials and skilled embroiderers that first attracted her to the Far East. In Hong Kong she found the fabrics and workmanship that contributed to her distinctive fashion identity.

In 1978 Freis opened her first fashion boutique in Hong Kong; by 1986 she had six more. But her influence did not remain in the local market. International buyers from Europe and the United States soon took her work overseas. In the U.S., her dresses came to adorn the bodies of society women who shopped at the likes of Neiman Marcus in Dallas or Bergdorf Goodman in New York. Suited more to the European figure than to the Asian, today the label can be found in over 20 countries. Her success has been based on locating a market niche, not by following international fashion trends. Falling somewhere between haute couture and prêt-á-porter, the designs have been produced in limited editions: no more than 10 of any one design are distributed around the world. Basic shapes remain consistent; the variety is provided by new fabric designs and combinations. To retain exclusivity, the company set up its own print design studio and manufacturing base in 1982. In recognition of her commercial achievement for Hong Kong, Freis was awarded the Governor's award for Industry for Export in 1993.

Despite its established success, the company continued to develop new ranges and to target new markets. Freis' easy-flowing garments have gradually gained some structure via shoulder pads, more tucking, and fitted pleat detail. In recognition of changing lifestyles, Freis Spirit was launched in spring 1994 as a diffusion line aimed mainly in the Southeast Asian market. Featuring a pared-down silhouette and more subdued designs, the collection offered mix-and-match coordinates in quality fabrics to a younger market.

Headquartered in Hong Kong, Freis continues to focus on her trademark polyester georgette dresses in bright patterns and solids. She has expanded from a focus on dresses and skirts to a broader line comprising suits and eveningwear. She is now able to clothe a woman during her workday career, at night in formal attire, or in casual situations, although she remains best known for her flexible, easy-fit, all-over-printed dresses. The designer's daywear business is divided into knitwear, classic polyester silk dresses and blouses, basic coordinates, and printed stretch tops, and her eveningwear line consists of beaded gowns, special occasion wear, beaded and embroidered jackets, camisoles, and scarves.

Freis has traditionally appealed to a more mature consumer but has extended her market into more youthful customers with her "young classics" line, consisting of tanks, chemise-and-jacket combinations and coverups, which Women's Wear Daily described as "sleek" in August 1999. A line of all-black polyester and silk tanks, dresses, and pants coordinate with all the products in her daywear and eveningwear lines, from beaded jackets to printed skirts.

Freis has also expanded geographically from her roots in the Asian market. She maintains a distribution network not only in Hong Kong, Taiwan, Malaysia, and Australia, but in the U.S., South Africa, and the Middle East. In 1999 Freis signed a licensing agreement with Guryich International, a Canadian company, for distribution in North America of a broad collection imported from Hong Kong. The line incorporates the one-size-fits-all polyester print dresses for which she is still best known but also includes 50 items from all facets of her line.